Most of you will probably find this post repetitive (please humor me and read on) since I'm still experimenting with aperture priority.  But now I've added something new...using the back focus button.

I'm reading Scott Kelby's The Digital Photography Book - Part 4 and fast-forwarded to the focus section since I've been really unhappy with some of the 'soft' images I've been getting.  Eureka!  Enter the back focus button.  A great idea until I learned that my Nikon does not have a dedicated back focus button.  No problem...just reassign the AE-L/AF-L button to do the job.  I'm not using that button anyway.  I think I'm seeing a difference.  Instead of using the shutter release to focus, which may result in unnecessary camera shake, I can now concentrate on using that button just to shoot.  As far as success, only time will tell but, in the meantime, I got out there during the week and put this discovery to the test while getting some aperture mode practice.


I spent some time in the cemetery of an historic church (I have a feeling the pastor thinks I have family there since I was there 3 times in a week) and took a number of photos of the iron fences surrounding the property and grave sites.  I'm happy with the dof, I'm happy with the focus (most of the time), and I've noticed I have to do less straightening of the finished product.
Of course, the shots of me photographing me were not taken in the cemetery...but you knew that.

And now to the cemetery... 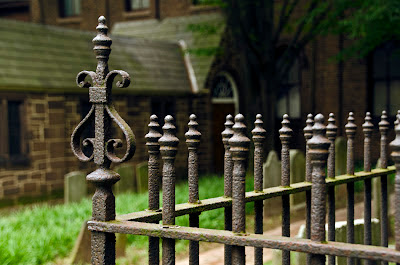 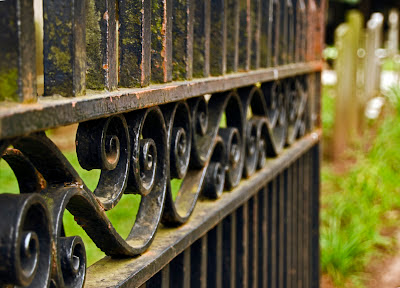 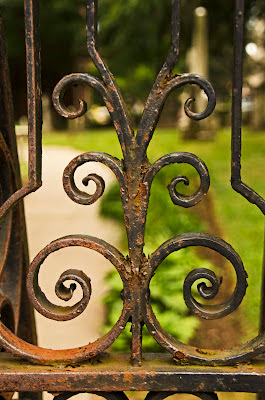 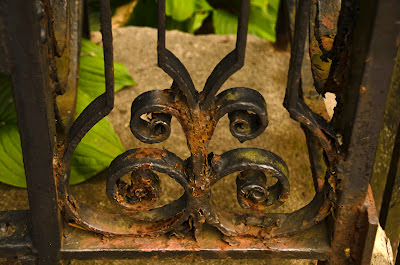 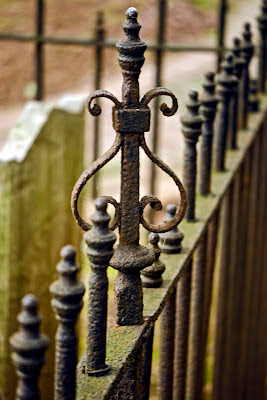 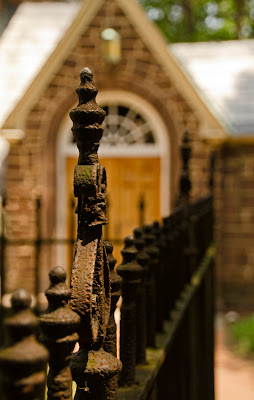 Fences...with rust and moss and webs and character.

(Daryl...thanks for the iron work inspiration!)

Sitting under the trees on a hill overlooking the bay,
a light breeze swaying the branches above.
Sail boats glistening in the sun
as the wake of passing boats cause them to bob up and down
and The Garden State Symphonic Band entertains the crowd
with music of the movies.

We were entertained with selections from Breakfast At Tiffany's, A Star Is Born, Rocky, and Moon Struck, to name a few, along with vocal performances by Paula Johns who sounded so much like Ella Fitzgerald.  Next Sunday...music from “LaBoheme” and “Beauty and the Beast.”  I hope I can get there and celebrate this side of summer.

Posted by Photokismet at 9:56 PM 7 comments:

I flip flopped between PSA (public service announcement) and Friends for the title of this post because my subject has two sides but went with PSA, thinking it would get more attention.  I guess I won't find out until I see the comments but both subjects are super important. Here goes...


Go get a colonoscopy if you're due.  The first one I had was ten years ago.  Today I had my second.  The prep was a snap...no yucky stuff to drink; just sodium tablets, clear liquids, ice pops, broth.  I'll be going (no pun intended) in another five years since there is colon cancer in the family but, I'd rather be safe than sorry.  It was a piece o' cake.  In fact, I could go for a piece of cake right now!..but I'll pass since I just lost 4 lbs. overnight (yea, I know...THAT won't last).


On another note, when several friends found out I was taking this step, they jumped right in and volunteered to go with me.  One even offered to take a vacation day to make sure I got there.  They are gems and I could not do without them.


Bottom line...my doctor told me I was boring.  He didn't find anything.  Actually, I was hoping he would find gold but I am thrilled with 'boring.'  It's a beautiful day. Yes, I know it's raining and damp but it's still a beautiful day.  Have a wonderful weekend and go get a colonoscopy if you're due.  After all, there are so many beautiful days in your future to spend with your friends.

Posted by Photokismet at 6:33 PM 8 comments:

The photo club at work is gearing up and it looks like it will be a success.  Today we had a guest artist who spoke about her work and techniques.  To say the least, it was an eye-opener or at least a reminder.  I too often forget to really look at my surroundings.  I've been extremely guilty lately of setting up the camera, clicking away, and not really thinking about what I want to achieve.  Afterwards, I'm sitting in front of the computer monitor staring at one picture (not photograph) after another that almost all look the same....flowers, flowers, flowers, flowers, birds, birds, birds, birds, blah, blah, blah, blah!  I need to make some changes.  And it's not just the subject matter; it's the depth of the photos that's troubling me.

With this thought in mind, I've been revisiting some really old files.  I started looking at them with the intent of pulling out photos for my tumblr site (www.photokismet.tumblr.com or click on the page at the top) but started to realize that not so long ago I was giving my photographs a lot more time, energy, and thought then I have been of late.


So I really need to get back...get back to giving more thought to the craft, more concentration when I look through the viewfinder, more care when considering a subject.  And I need to go out and get the photo; it's not going to walk up to me and jump into my camera.  Thank you Madelaine Shellaby, you've certainly given me something to think about.

Posted by Photokismet at 9:11 PM 9 comments: 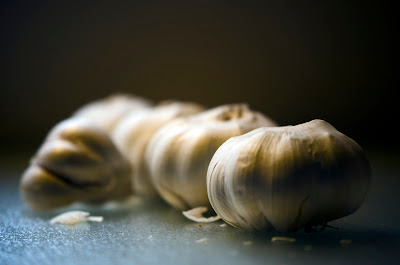 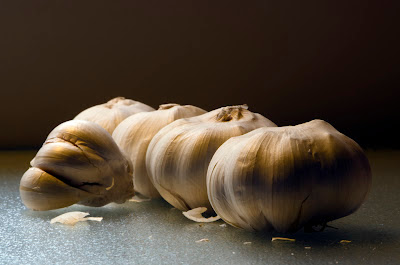 Nope, this post is not about squash or zucchini or scallions or Jersey sweet corn.  It's about aperture priority and the fact that I've been a lazy photographer and never really concentrated on anything but the manual setting on my camera. 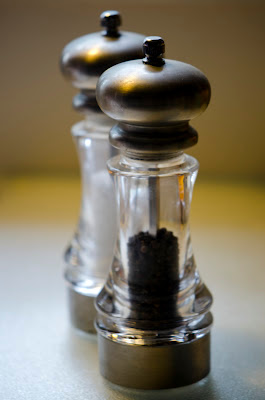 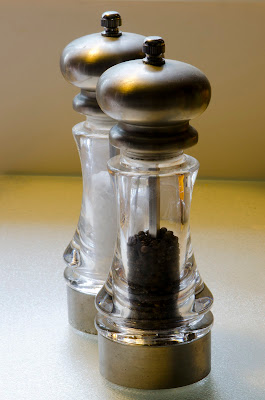 This all started when one of my bosses and I had a discussion about a photo course he's been taking as prep for an upcoming trip.  He and his wife will be climbing Mount Kilimanjaro (yes, I did say climbing Mt. Kilimanjaro - cannot wait to see the photos!).  The course, at this point, is concentrating on camera settings and he noted that, while on the move, he would be making a lot of use of aperture priority and saving manual for when there was enough time to play with various settings.  Now, if it were me, I'd probably throw my hands in the air and set the dial on my camera to full auto.  After all, I'd be concentrating on my air intake and blisters.  Aperture and shutter modes, up until now, have been totally foreign to me. 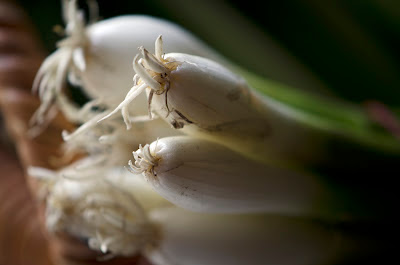 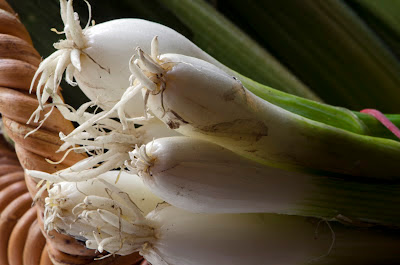 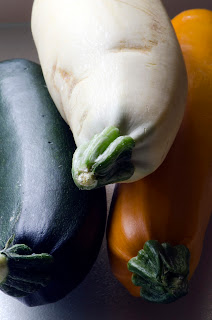 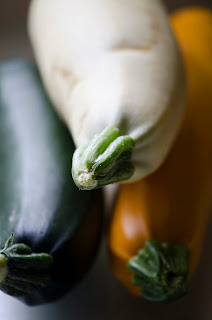 So, in the interest of wrapping my head around aperture priority (shutter priority will come later), I decided to experiment with the vegetables I bought at the farm market that sets up in our company cafeteria (a wonderful perk) every Tuesday.  All shots were taken at 100 ISO with an 85mm Nikkor micro lens.  The first shots (top or left) of each set were taken at the widest aperture (3.5) and the second shots, at the smallest (32).  Which do you prefer? 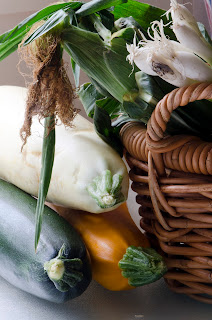 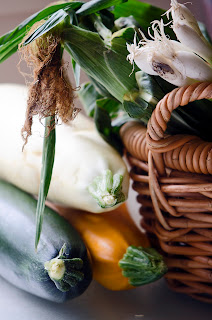 There are several shots here where I almost can't tell the difference.  Nonetheless, this experiment or learning experience was way too much fun but that's what photography is all about, isn't it?

Saturday...the end of the week.  I just realized I've been on vacation all week and haven't done much of anything.  Usually I have a list of things that need to get done but, with the weather the way its been (day #10 of a heatwave in central NJ), who wants to even move.  So, here I am, with only the weekend left, reviewing all the unnecessary things I did do...

#1 - Rediscovered my grandparents' grave site...I hadn't been there in about 45-50 years.  The cemetery was not easy to find but the grave was even harder.  The tombstone is written in Russian but somehow I recalled the area where they were and was successful.  I managed to copy the lettering for translating later.  This stone was set in 1933, the year my grandfather died. 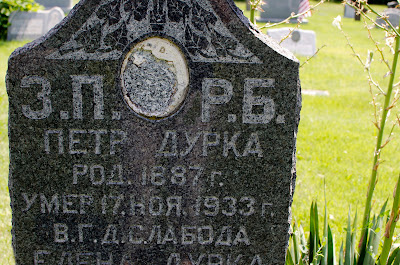 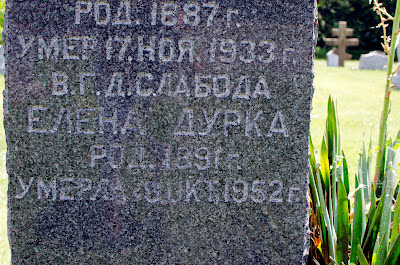 #2 - I did manage to get in some walking early one morning with a friend and did 4 miles along with several errands and also got the tombstone lettering translated.  My girlfriend's mother is Russian so we stopped for a visit and her translation services.  I would not have missed this for the world...it was like stepping into the past.  First off, her home is an older home complete with a massive garden, grape arbors, and a summer kitchen.  That's where we found her...frying bacon and eggs in the kitchen in the basement...a summer kitchen.  Every house should have one!  I also got to pick a ton of mint she had growing in the garden.  Years and years ago, we had a neighbor who grew mint and we would sneak into the yard and sit under a tree and munch on the mint leaves.  They're still just as minty and refreshing as they were back then.  I'm going to try and root some for planting and also dry some out for tea. 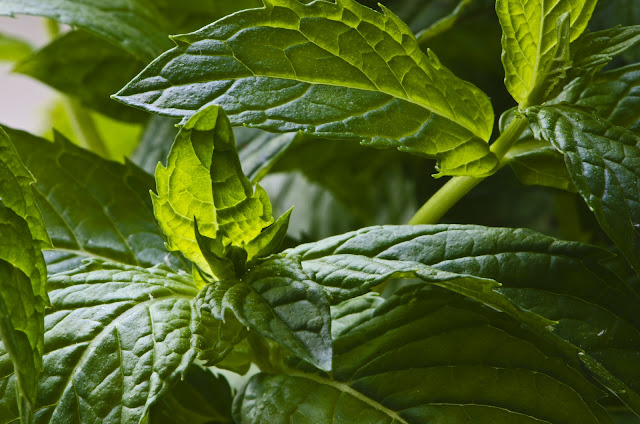 #3 - Did lots of gardening and watering...well, mostly watering.  My clematis has finally taken off.  In fact, the one plant looks so good, I planted another.  It's always amazing to me that, in extreme heat, most things are slow to grow; most things except weeds.  Along with a few weeds I discovered mushrooms this morning.  At first, I always think they are so pretty or unique and then I realize what they really are...fungus.  Too bad these are not edible. 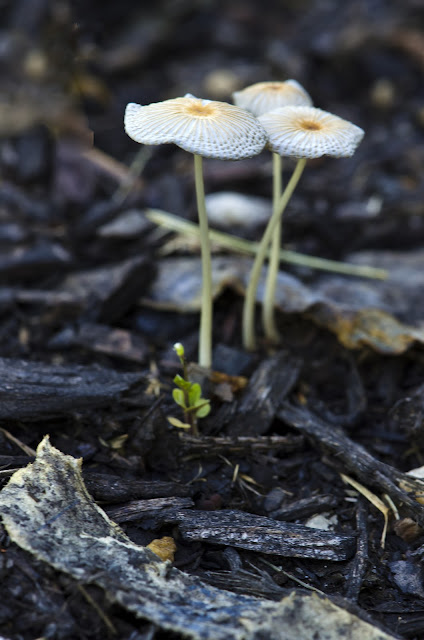 I know I took a lot of photographs, many of which I'm not thrilled with, and I know I did other things but it's just too hot to recall them at this point.  And, speaking of too hot, I'm supposed to be at my girlfriend's pool in 15 minutes.  Maybe I'll remember more when I cool down.

Welcome! What language do you speak?